Good nutrition is a basic need for everyone, everywhere. Imagine a world where all men, women and children have the nutrition they need to live healthy, productive lives, nurturing our families and communities and putting the world on a path toward greater economic prosperity.

With growing demands on our food system and on our planet, the world is off track to reach the 2025 World Health Assembly nutrition targets and the target set by the SDGs to end malnutrition in all its forms by 2030.

While significant progress has been made, there is an urgent need to accelerate action. Climate change is one of the greatest challenges facing all regions today and has complex interlinkages with both obesity and undernutrition. Diets are changing, while the food system continues to be the contributor to greenhouse gases. The connection between nutrition, the global food system, and climate change cannot be ignored by the international community.

As the 2025 deadline approaches, nearly half of all child deaths are still due to malnutrition. Hunger is now on the rise and healthy diets are still out of reach for far too many. Poor diet is now the leading risk factor for death worldwide, responsible for one in every five deaths globally. 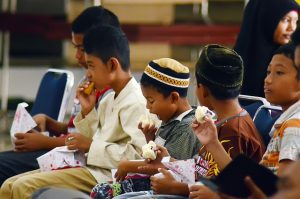 In an attempt to create momentum toward eliminating malnutrition and meeting global goals, the Japanese government is hosting the Nutrition for Growth summit, or N4G, in December 2020.

The event is designed to draw global attention to nutrition targets that remain an “unfinished agenda” and intends to position nutrition as a vital investment — one of the “best buys” in global development that sees $16 returned to the local economy for every $1 invested.

Commitments are expected to be made in three categories:

> “health,” which will focus on integrating nutrition into universal health coverage;

> “food,” on building food systems that promote nutrition, ensure producer livelihoods, and are climate-smart; and

> “resilience,” on addressing malnutrition in fragile and conflict-affected states.

The first Nutrition for Growth summit was held in 2013 in London, where stakeholders pledged to prevent at least 20 million children from being stunted. Over $4 billion was pledged for undernutrition, along with $19 billion in nutrition-sensitive investments to be spent by 2020.

As the Olympic Games kick off in Tokyo this July, the Gates Foundation will participate in an event expected to include significant pledges for nutrition and encourage countries and stakeholders to set their own goals leading into December.

For more information about the N4G summit visit: https://nutritionforgrowth.org

Prime Production provides translating and interpreting support to NGO’s around the world in their effort to end malnutrition in all its forms.