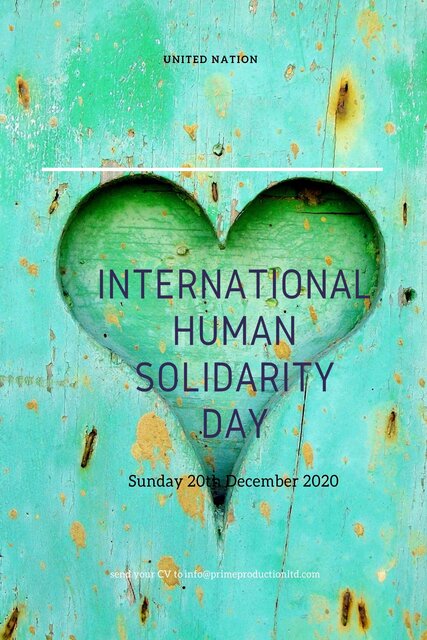 Every year on December 20th, the United Nation celebrates International Human Solidarity Day. Solidarity is defined as an awareness of shared interests and objectives that create a psychological sense of unity. Solidarity also refers to the ties in a society that bind people together as one.

Solidarity has played a key role within the work of the United Nations since its conception. The United Nations has aimed itself at promoting world peace, human rights and global social and economic development. The United Nations Millennium Declaration, signed in September 2000, adopted 60 goals which identified solidarity as one of the core values in international relations within the 21st century, particularly when combating global poverty and the increasing inequality it brings. The Declaration also states that global challenges must be managed so that costs and burdens are distributed fairly.

On the 20th December 2002, General Assembly established the World Solidarity Fund as part of the United Nations Development Programme. The goal of this fund is to eradicate poverty and promote human and social development in countries, particularly amongst those who are most vulnerable.
Since then, this date is marked annually to promote the importance of sharing and the culture of solidarity. The United Nations encourages governments, NGO’s and individuals at all levels to organise programmes and open up debates so that a greater level of awareness is spread in order to alleviate poverty across the globe.